Now a two-horse race in the battle to win this year’s FIM Hard Enduro World Championship, KTM Factory Racing’s Manuel Lettenbichler holds a slender four-point lead over Sherco Factory Racing’s Mario Roman. However, with the championship finale being played out in Spain, Roman will be using every ounce of the available home advantage to beat Lettenbichler to the title. After seven incredibly exciting rounds, the outcome of the 2022 season all boils down to the 24MX Hixpania Hard Enduro. A favourite for many on the Hard Enduro circuit, the quiet medieval town of Aguilar de Campoo is set to put on an event that will test the world’s best riders to their maximum.

Now in its sixth edition, The 5 Elements – race organisers of 24MX Hixpania Hard Enduro – have prepared three days of racing for the final round of the championship. Set to kick things off in style on Friday, October 7 will be a feast of action. Friday morning sees the 350 competitors stretch their legs with an easy practice lap of Saturday’s Campoo Xtreme course. That’s followed at noon by the SuperEncierro qualification at the Hixpania Village Endurocross track. Those who have already earned world championship points are pre-qualified. The fastest riders will then face the nighttime SuperEncierro prologue on the main square of Aguilar de Campoo. Competitors will go head-to-head under floodlight for a place in the Friday finals. Day two starts early with Campo Extreme Race. A testing, but fun loop will navigate competitors around the town’s lakeside. With numerous sections increasing in difficulty for competitors, it will be a tough day in the saddle for many. The top 50 riders (40 Knights class, 5 Archers class and 5 Squires class) on Saturday will qualify through to Sunday’s ACERBIS Lost Roads finale.

A multi-lap Hard Enduro race, it promises to put riders through their paces with its rocky climbs, giant rock steps, and steep forestry descents. After two hours and thirty minutes on the ACERBIS Lost Roads course, competitors are faced with the final sting – the Hixpania Hill. The first rider to the top will be declared winner of round eight and will potentially become the 2022 FIM Hard Enduro World Champion.

With the 2022 title chase all coming down to the 24MX Hixpania Hard Enduro, Lettenbichler and Roman are set to decide this year’s championship outcome. Lettenbichler has the edge, holding a four-point lead over Roman. While victory will most certainly be on the German’s mind, finishing as runner-up to the Sherco rider in Spain will still be enough to clinch the title. Roman will be gunning for nothing less than victory in Spain. The Spaniard is a former winner of the race and will be hoping home advantage pushes him to the top of the podium once again, while ultimately becoming the 2022 FIM Hard Enduro World Champion. With nothing to lose, his goal must be to race for the win and hope Lettenbichler finishes third or lower. 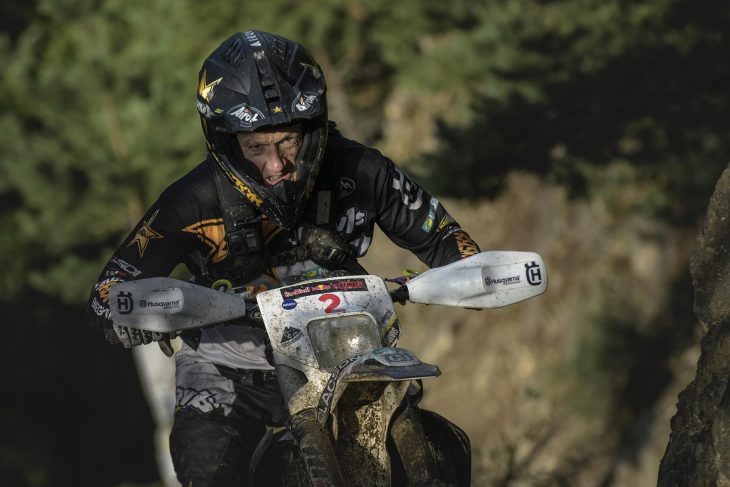 As a multi time winner of 24MX Hixpania Hard Enduro, Jarvis Racing Team’s Graham Jarvis sits third overall in the championship. While no longer in the title fight, Jarvis could play an important factor in Spain as he bids to fend off Team Bulgaria powered by ECONT’s Teodor Kabakchiev for the final step of the podium.

Sixth in the championship standings, AG Racing Team 89’s Alfredo Gomez is a rider both Lettenbichler and Roman will need to watch for. The Spaniard won the race convincingly in 2021 and after a difficult season will hope to end his 2022 campaign on a high with another win in Spain. In what’s proving a competitive season, Gomez is tied on points with GASGAS’ Michael Walkner and David Cyprian (KTM). With all three riders holding the prospect of finishing top five in the final championship standings, there is still a lot to play for.

The inaugural FIM Junior World Cup is also set to be decided at round eight. Rigo Racing’s Matthew Green leads the way with an 11-point advantage over Rieju’s Mitchell Brightmore. AG Racing Team 89’s Suff Sella is a further two points behind in third. While the title appears to lean in Green’s favour, there are still three days of tough racing ahead. The eighth and final round of the 2022 FIM Hard Enduro World Championship takes place at 24MX Hixpania Hard Enduro in Aguilar de Campoo, Spain on October 7-9.

Provisional Championship Standings (After round 7)