With the outcome of the 2022 FIM Hard Enduro World Championship set to be decided on the final day of the season at the 24MX Hixpania Hard Enduro in Aguilar de Campoo, Spain, excitement was high ahead of the ACERBIS Lost Roads race. Manuel Lettenbichler held a narrow four-point lead over Mario Roman in the title chase ensuring it was still all to play for for both riders. Having qualified fastest across Friday and Saturday’s racing, Manuel held the advantage of starting first and was keen to make the most of it. Immediately into the lead, he set about putting as much distance as he could into rival Roman on lap one. With Sherco-mounted Roman starting ninth, he had work to do to catch Lettenbichler, but the Spaniard was fiercely determined. A strong opening lap saw Mario carve his way through traffic and was pretty soon on the wheel tracks of AG Racing Team 89’s Alfredo Gomez and FMF KTM Factory Racing’s Trystan Hart in second and third. Needing a bit more time to see off Hart and then Gomez, Mario was up to second place.

Lettenbichler wins the race and the title

With Manuel holding a three minute lead over Mario, the chase was on. Attacking, the Spaniard fought to reel the German in, but Manuel was able to control the gap. Entering the final Hixpania Hill out front, the title was within Lettenbichler’s grasp. Navigating the incredibly steep climbs, the German remained mistake free to cross the finish line as the race winner and as the newly-crowned 2022 FIM Hard Enduro World Champion. Forced to concede defeat, Roman finished just under five minutes behind Lettenbichler in second to end his 2022 season as the runner-up. Gomez finished behind Roman for third in this year’s 24MX Hixpania Hard Enduro. 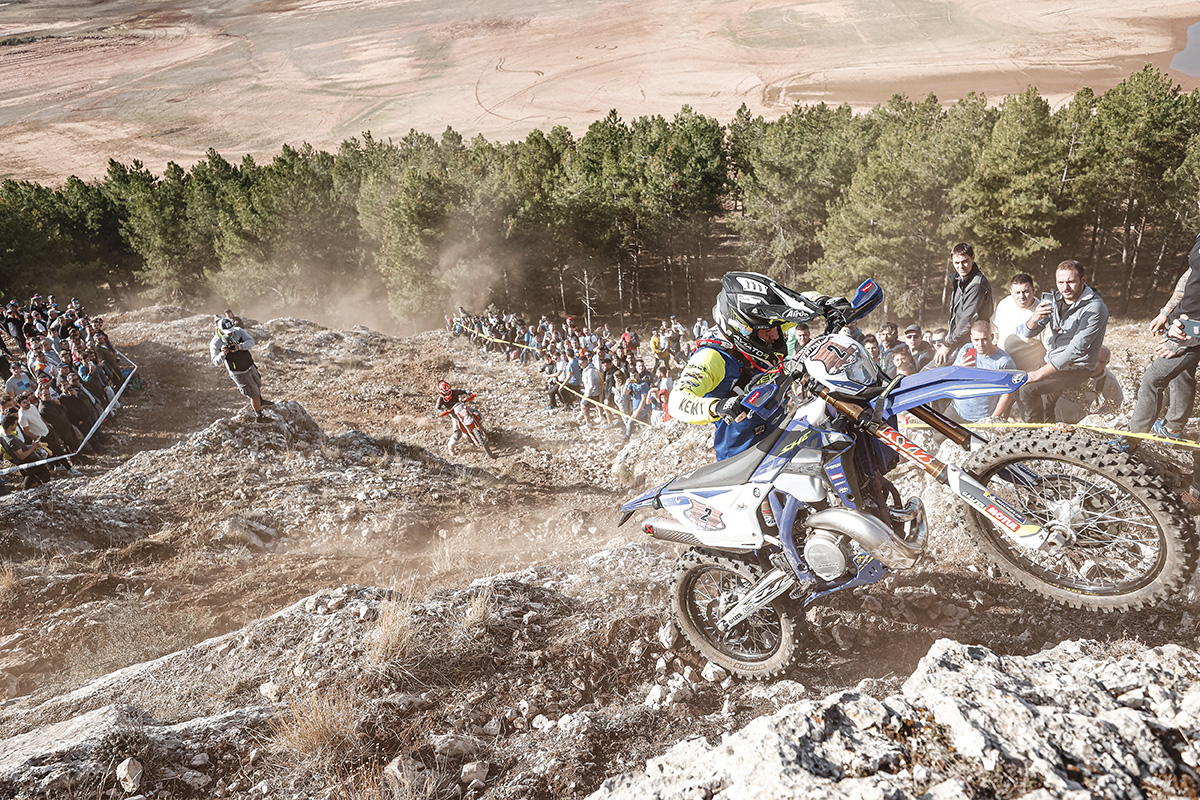 With a strong ride in the closing stages of the race, Hart battled past Jarvis to claim fourth. Finishing fifth, Jarvis cemented his position of third overall in the final championship standings.

In the race to become the 2022 FIM Hard Enduro Junior World Cup Champion, Rigo Racing’s Matthew Green got the job done. With a comfortable points lead over Suff Sella (KTM), the South African knew he didn’t need to win today to seal the title. Following Sella home for ninth overall was enough to become champion. Topping the Junior category in Spain, Sella was rewarded for his efforts by edging out Rieju’s Mitchell Brightmore for runner-up in the championship.

Manuel Lettenbichler (KTM): “WORLD CHAMPION! I’m so stoked with that! The pressure was on this morning. I was pretty nervous before the start. Getting away first I settled into the lead, but after the one hour mark I was feeling pretty tired. I knew Mario was in second and only about two minutes behind me, so I had to keep focused. Once I got to the final climbs I started to get excited about the title, knowing it was so close. It’s amazing to be the 2022 Hard Enduro World Champion. It’s been a crazy, good year. It’s been awesome battling the guys, but I’m ready to celebrate now!” Mario Roman (Sherco): Starting in ninth I knew it would be an uphill battle to catch Mani, but I gave it my best shot. I passed around five riders pretty quickly, but it took some time to pass Alfredo (Gomez) and Trystan (Hart). My pace was good, but Mani was matching it and I couldn’t quite get close enough to him. It’s frustrating to lose the title. I gave it my best all year. Congratulations to Mani. Finally, a big thank you to Sherco for their incredible support.”

Graham Jarvis (Husqvarna): “It’s been a good weekend and good day today. To finish third overall in the championship is brilliant. I started out this season with my own team and also coming back from injury. But we made the podium straight away in Israel and then won Red Bull Romaniacs. For an old guy, I think we’ve done pretty good, and I’ll be back for more!”

Matthew Green (KTM): “It feels amazing to be the first Junior champion in Hard Enduro. I was nervous coming into today, but I managed to keep it together, ride smooth and get the job done. Winning this title was a big goal of my team Rigo Racing and myself, so I’m super happy to achieve it.”